FixPanel researh shows that the Apple users are quick to adopt the latest software updates. Mobile analytic firm Mixpanel has released figures that suggest 90 percent of Apple's (active) mobile devices now run on the company's iOS 7 operating system. On the other hand, only 8 percent of devices using Google's Android are currently running KitKat (4.4) or higher.

According to TechCrunch, the real-time stats tracker shows that between 88-90 percent of Apple's mobile devices run on iOS 7, with a majority of devices already running on the recently rolled out iOS 7.1 update. Between March 10 and March 23, Mixpanel has seen 31 percent of visits on its partner apps and sites come from iOS 7.1, versus 29 percent via 7.0.6 In comparison, a majority of Android powered devices still run Jelly Bean (4.1-4.3), clocking in at nearly 70 percent. The roll-out of Google's Kit Kat is restricted to newer devices, with very few manufacturers actually providing updates to the relatively older devices. 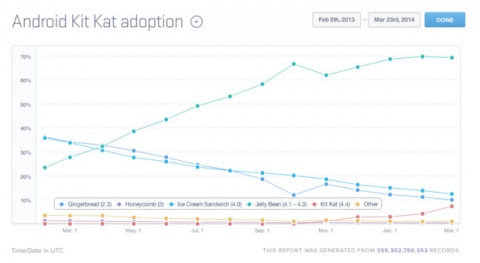 Google claims to have optimised KitKat to run on older devices. Despite this, the roll-out has been fairly small, with manufacturers only serving to provide the update on popular devices. The slow adoption rate will also hurt Google as most users still aren't using its newest crop of services such as Google Now.

Apple users, on the other hand, are good at remaining fairly current. This is also a boon for app developers who're building apps for iOS 7.