Home » News » Researchers Create The Thinnest LEDs In The World

Researchers Create The Thinnest LEDs In The World | TechTree.com

Researchers Create The Thinnest LEDs In The World

The world of technology could be turned on its head with the LEDs that measure in at just three atoms thick! 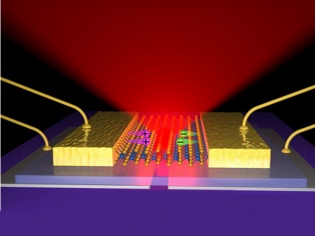 LEDs have been around for some time now, but they've only recently become the mainstay of lighting and display technology the world over. Now, a bunch of researchers at the University of Washington have taken the technology to its next level by creating what they call the world's thinnest LEDs that measure in at just three atoms thick!

Xiaodong Xu, who published research papers on nano technology in Nature.com told TheVerge.com, that "Such thin and foldable LEDs are critical for future portable and integrated electronic devices," .

The researchers said that LEDs could be 10 to 20 times thinner than they currently are. Apart from the obvious uses in flexible/fordable displays and wearables, they could even be used in computer chips of the future where optical signals could replace electrical ones.

The miniaturisation of LEDs does not only make for thinner and flexible devices, but will also provide a massive bump in the efficiency. For now the technology to make such devices is not easily accessible. The researchers are hoping to develop an easier way of making their LEDs in the future.

“Our work makes it possible to make highly integrated and energy-efficient devices in areas such as lighting, optical communication, and nano lasers," added Xu.

With such alluring characteristics, the development of such miniature LEDs and other nano devices will hold the key to all the devices and technologies we see in the future.