Home » Tablets » Does Microsoft Want To Kill The Laptop With Its Surface Power Cover?

Does Microsoft Want To Kill The Laptop With Its Surface Power Cover? | TechTree.com

Does Microsoft Want To Kill The Laptop With Its Surface Power Cover?

The connectivity and ease of use of a tablet, now enhanced with a physical keyboard and 70% longer battery life. 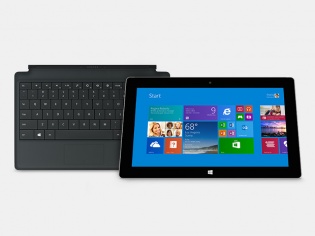 Tech giants like Apple, Microsoft, and Google have been at it for a few years now, and their unrelenting drive to kill off the laptop is only heating up. While tablets offer a lot in terms of mobility and connectivity, they've never really matched the all-round versatility and brute force of the laptop.

Microsoft has however gotten ever closer with the announcement of its Surface Power Cover that offers a physical keyboard with a whole lot of extra juice. The cover will snap onto the Surface Pro, or the Surface 2 and Surface Pro 2, and apart from acting as a keyboard it will also charge the tablets for extended using.

How may that kill the laptop you ask? Microsoft claims the Power Cover increases battery life of its Surface line of tablets by 70 per cent. Tablets have already been beating laptops on the battery life front, and with such a massive increment, some people are bound to opt for a tablet instead.

Microsoft is already taking pre-orders for the Surface Power Cover in the US, Canada and Japan at a price of $199.99. The tentative shipping date for the cover is March 19th.

There are however a few niggling bits about Microsoft's Surface add-on. Unlike the Type Cover 2, the Surface Power Cover doesn't get a backlit keyboard, is nearly two times thicker, and not to mention a lot heavier.

According to The Verge, Microsoft could also debut the Surface 2 tab equipped with 4G-LTE support alongside the Power Cover. The combination of the two devices could make for an ideal device for people who long for better and faster connectivity and greater battery life. Now only if Microsoft would fix those niggling compatibility issues with its tablet, PC and mobile operating systems.