The MediaPad X1 comes with a 13-megapixel rear camera and quad-core CPU. 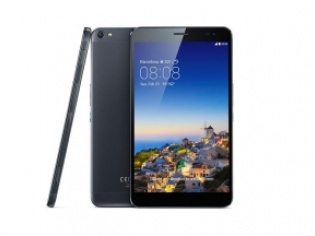 Chinese manufacturer are making their presence felt at the Mobile World Congress (MWC) 2014 in Barcelona, Spain. The Chinese attack is lead by Huawei, who unveiled the MediaPad X1. At 7.1 mm, it's the world's thinnest 7-inch tablet according to the manufacturer. It's also impressively lighter at around 240 grams. The screen has full-HD resolution (1920 x 1080 pixels). It is by Huaweí’s own 1.6 GHz quad-core (HiSilicon 910 Kirin) processor combined with 2 GB of RAM.

the X1 boats of a 13 MP rear camera with LED flash, a 5MP front-facing camera, microSD card slot and a 5000 mAh battery. This tablet comes with phone functionality. It runs Android 4.2.2 Jelly Bean out-of-the-box. Currently, there's no information regarding its pricing and availability.