Google: “We are literally everywhere” 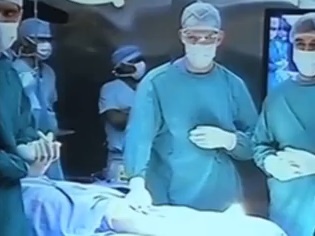 Google’s really Gung-ho about its Google Glass. They are pushing the “Glass initiative” just about anywhere and everywhere. This time a team of doctors in Jaipur, under the supervision of orthopaedic surgeon Dr.Parekh, conducted a successful foot and ankle surgery which was broadcasted LIVE on Google via the Internet.

“The surgery was held during a three-day annual Indo-US conference attended by a team of experts from the U.S., and headed by Dr. Ashish Sharma.

Sharma said Google Glass allows looking at an X-Ray or MRI without taking the eye off from the patient, and allows a doctor to communicate with a patient's family or friends during a procedure.

"The image which the doctor sees through Google glass will be broadcasted on the internet. It's an amazing technology. Earlier, during surgeries, to show something to another doctor, we had to keep moving and the cameraman had to move as well to take different angles. During this, there are chances of infection. So, in this technology, the image seen by the doctor using Google glass will be seen by everyone throughout the world," he said.

Doctors said the small devices, which feature a screen that sits just in front of a user's right eye, will revolutionize surgery and would teach procedures to aspiring surgeons without being part of operation team”, reported DNA India.

The gadget is yet hit Indian markets but Google has been distributing it to various professionals for testing before it is available to the common man.

Check out the video below: