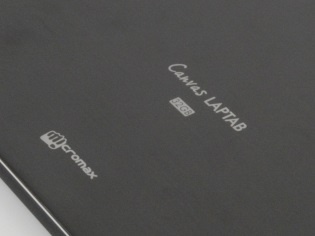 Micromax has unveiled the first dual-boot Windows and Android tablet called the LapTab at CES 2014. LapTab would be launched officially in early February for consumers.

Powered by an Intel processor (Bay Trail-M), the first-in-the-world tablet promises an impressively long battery-life for media consumption on the device. The device supports both Android 4.2.2 Jelly Bean OS and Windows 8. Users would need to simply reboot the device and select the alternate option to switch from Windows to Android and vice versa.

The LapTab sports a 10.1-inch IPS vibrant display and is powered by a 1.46 Ghz Intel Celeron N2805 (Bay Trail-M) processor, 2GB RAM and 7400 mAh battery. The tablet packs in a 2MP front camera  but no rear camera. It has an inbuilt storage of 32 GB with expandable storage up to 64 GB. The tablet supports Bluetooth v4.0 and Wi-Fi. The LapTab comes with a ‘transleeve’ which can be combined as a cover and stand for the wireless keyboard. Consumers will also have an option to buy a customized keyboard for LapTab when it hits the stands. LapTab will be available across e-commerce portals and retail stores starting early February, 2014.