Gives us an idea of what to expect from future devices. 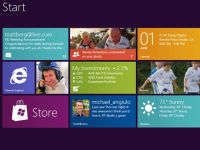 Software giant Microsoft has published hardware guidelines for its Windows 8 based tablets. The most notable requirement is the presence of five mandatory physical buttons, namely Home, Power, Volume, and an auto-orientation Lock. Reportedly, the camera should be capable of 720p video recording, and the screen must be packed with at least 1366x768 pixels. Other required features include a USB port, Wi-Fi, Bluetooth 4.0, NFC, and a whole bunch of sensors. Microsoft has also re-introduced the old-school Task Manager, but replaced <CTRL> + <ALT> + <DEL> with the Home + Power combination.

Unlike Google, Microsoft seems to be strict about its hardware guidelines. Whether this strategy will work in favour of the Redmond-based company is currently a matter of debate. Either way, the results will be out later this year, when the first wave of Windows 8 tablets hits the market.