The apps include Sony LIV for TV programming and BIGFlix for movies on demand. 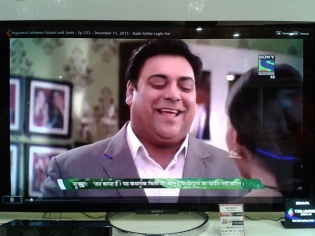 The Sony LIV app is a virtual repository with "18 years of rich and exclusive content" from Sony Entertainment Television, across genres such as drama, comedy, thriller, reality shows and more. The app opens access to Sony's current and classic shows, along with content customisation if you opt to create an optional profile. The app incorporates multi-bitrate video streaming to adjust video quality as per the bandwidth of your internet connection. The apps are listed in a minimalist tile interface

Movie buffs have the option of paying a subscription for the BIGFlix app. The app gives access to HD movies from a catalogue spanning over 1500 films from across genres such as action, comedy, drama, and romance. The movies span 10 languages including Hindi, English, Telugu, Tamil, Bengali, and Punjabi. Those not sure about paying for the service can try out the three-month unlimited subscription.

The Opera TV Store is Opera Software's HTML5 application platform for internet devices. This implementation has been optimised for the large screen experience of Sony BRAVIA internet TV. Apart from that, Video apps are available across categories of music, social networking, games and news. The service has been available on all internet-enabled Sony TVs since the last year. Older internet-enabled Sony BRAVIA TV models will also get the functionality through a firmware update.