The Iris 503 is said to be designed by the in-house R&D team at Lava. 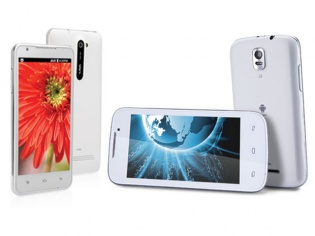 The Iris 503 is said to be designed by the in-house R&D team at Lava. From the images, the design doesn't seem anything extraordinary. However, we will hold our horses till we have the product in hand. At the India Telecom 2013, Lava also exhibited its entry-level 3G Android smartphone, the 3G 402. It is also powered by a 1.2 GHz dual-core processor and the Android 4.2 (Jelly Bean) operating system which is seeding as an OTA upgrade. Along with a 4" capacitive WVGA touch screen, the 3G 402 sports a 3 MP rear camera and a VGA front camera. The 3G 402 comes with 512 MB ROM + 256 MB RAM, and a microSD card slot with support for up to 32 GB. Yet another phone with just 256 MB RAM; Android Jelly Bean is known to struggle on phones with twice the amount of RAM too. Don't be surprised if a lot of lag is bundled free with this device.