Humble Jumbo Bundle Offers Games Worth $120 For Less Than $5 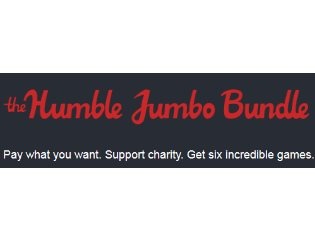 Just when you thought you could give your wallet a rest after 80% Off on many games on Steam, another irresistible juicy sale bundle comes online, and this time from Humble Bundle.

As usual you can pay as low as $1 for the last three games or just $4.11 (as of this writing) to unlock all games which also includes soundtracks thrown in for good measure. The juiciness doesn’t end there; more games will be unlocked by next Tuesday, and will get added to your account even if you purchase the bundle before that.

Why not buy it on Steam?
Since the Steam Sale is over, you’ll be paying a lot more for each of the games if you were to buy them individually. In fact, in the Steam Sale itself with 80% off on Serious Sam 3, it was selling for much higher than $5 just for one game alone.

This is probably the best way to beat piracy and do some charity. At the end of the day, you support the developers who make games like these which you enjoy. We say roll-over console games, you are far too expensive, PC gaming rocks for this alone!