Home » Cameras » Capturing Images At The Speed Of Light

Capturing Images At The Speed Of Light

Students at the MIT Labs are at it again. 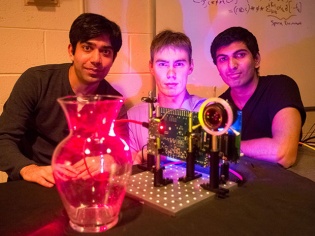 MIT Media Lab has created what is calls an "inexpensive nano-camera" which can snap shots at the speed of light. The device, which takes its premise from "Time of Flight" technology (something similar to what Microsoft's second-generation Kinect packs in) can be used in "medical imaging, collision-avoidance detectors for cars, and interactive gaming". The team of developers (which includes two Indians, Yay!), further clarify that the camera will not be affected by elements of nature, such as by rain, fog, or even translucent objects for that matter. The latter is something that even the Kinect cannot claim to do.

"Using the current state of the art, such as the new Kinect, you cannot capture translucent objects in 3-D. That is because the light that bounces off the transparent object and the background smear into one pixel on the camera. Using our technique you can generate 3-D models of translucent or near-transparent objects", says co-author Achuta Kadambi. You can check out the entire report here.

A couple of years ago, MIT had developed a "trillion-frame-per-second camera" which could capture "a single pulse of light as it travelled through a scene", using "femtosecond impulse of light". However, this “femto-camera” would require as much as $500,000 to build. In stark contrast, this new nano-cam can be created at $500 (1000 times cheaper!), but that comes at the cost of imaging quality. The new three-dimensional camera model, which the team calls nanophotography, was presented at the Siggraph Asia in Hong Kong, earlier in the month. This is just a prototype for now, but since a similar technology is already being used (by Microsoft), you can expected it to become a retail reality soon. In the meantime, you can check out the femto-camera video demo below: