Micromax Canvas Juice A77 Shows Up Online Prior To Official Launch | TechTree.com

Micromax Canvas Juice A77 Shows Up Online Prior To Official Launch

The phone boasts of a massive 3000 mAh battery. 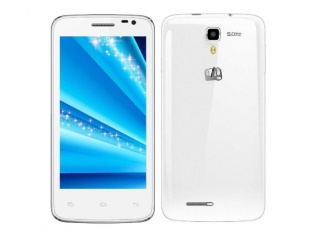 One of the top smartphone manufacturers in India, Micromax, has added Juice A77 to its Canvas series of smartphones. Yes, the name sounds a bit weird, until you found out that the phone comes with a massive 3000 mAh battery. It sports a 5" screen with pixel dimensions of 480x854. The phone is powered by a dual-core processor clocked at 1.3 GHz. Photography is taken care off by a 5 megapixel rear camera coupled with an LED flash. For video calling there's 0.3 MP front-facing snapper. Like most domestic smartphones, this one supports dual-SIM functionality. On the software front, Micromax offers Android 4.2 (Jelly Bean) out of the box. The phone has 1 GB of RAM, which should be enough to deliver decent Android experience.

The Micromax Canvas Juice A77 is listed on HomeShop18.com with a coming soon tag. At a price tag of Rs 8000, it competes directly with Nokia Lumia 520. The official announcement from Micromax is expected in next few days. If the RAM figures displayed on the eCom site are correct, A77 will be one of the cheapest Android handsets to offer 1 GB RAM.