But we love you so much Winamp. 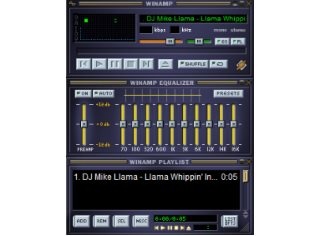 The beloved media player of the 90's — Winamp will shut down services on 20th December, 2013; after 15 long years of service. No reason has been given why, but many point fingers to the mother company AOL's mismanagement over the years.

When you point your browser to Winamp.com (for the last time), you are greeted with a message “Winamp.com and associated web services will no longer be available past December 20, 2013. Additionally, Winamp Media players will no longer be available for download. Please download the latest version before that date”. This means if you are one of the last remaining people using Winamp (like me), you'll want to grab the latest and the last release of Winamp version 5.66.

Damn You AOL
In an interview with Ars Technica last year, Rob Lord, the first general manager of Winamp, and its first hire said, "there's no reason that Winamp couldn’t be in the position that iTunes is in today if not for a few layers of mismanagement by AOL that started immediately upon acquisition".

Well that really does whip the llama's ass. And more shockingly, there's still an AOL around? In any case, we hope that this "One part genius, three parts llama" player gets open-sourced soon.

Alternative?
foobar 2000 came about as a relief from AOL’s mismanagement of Winamp, and this one indeed is much better in terms of sound quality. Everything else isn’t as rosy and feature-rich out of the box. You'll need to tinker around a lot to get it working in the same way. Also for those in love with Winamp "Milkdrop2" visualisation, foobar offers Winamp plugin support too.

Sniff, "Long live the Llama". I will be listening to and watching my 80's-90's era music visualised on Milkdrop2 FOREVER! The Dulles-based Winamp team, as of 2012 - Source ArsTechnica