Google Accedes To Request For A Change In Its Maps

Will get rid of images of an accidentally-captured crime scene. 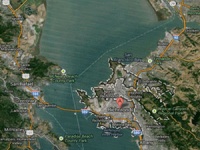 In 2009, a 14-year-old teenager was shot to death in Richmond, California, and his body was found dumped near a railway track in the location in August that year. As the police discovered his mortal remains, Google's mapping service managed to capture images of a police cruiser with a sizable crowd of people, reports Reuters.

In a move that is new to the search giant, Google has acceded to removing the images from its Maps listing. While it receives several requests to modify its Maps, this time, it has decided to replace the image, after the young lad's father, discovered the image on the service. Although the image is still up, it will take up to eight days for it to be changed.

Maps vice president Brian McClendon further clarified: "Google has never accelerated the replacement of updated satellite imagery from our maps before, but given the circumstances we wanted to make an exception in this case".