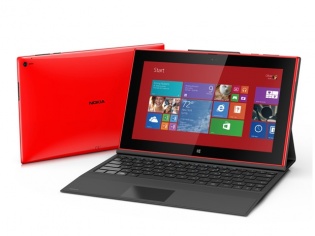 Nokia's long-awaited Windows RT 8.1 tablet has finally seen the light of the day. The Finns have unveiled their first 10" tablet called Lumia 2520. It features a full-HD (1080p) IPS display, encased in Gorilla Glass 2. It's backed by a 2.2 GHz quad-core Qualcomm Snapdragon 800. You can also snap photographs using the tablet's 6.7 megapixel autofocus camera, which flaunts ZEISS optics. For video chatting, there's a 2 MP HD wide-angle camera on the front. For connectivity, the 2520 offers 4G LTE, WiFi, and Bluetooth. It packs in an 8000 mAh battery. According to Nokia, the 2520 can play videos for 10 hours on a single charge. It can go from zero to 80 per-cent charge in an hour. On the software front, you get Windows RT 8.1 with pre-loaded Office and Outlook suite. This set of productivity apps will be a major plus for the Lumia tablet to compete against the iPad and Android tablets. However, Windows RT doesn't stand a chance against the Google Play Store or Apple's App Store when it comes to sheer numbers. To add more value to the package, Nokia has thrown in its offline HERE Maps and Music services.

The 2520 sports a polycarbonate body, much like the Lumia handsets. Another thing worth mentioning here, is the set of front-facing speakers. Although it's the first time Nokia has ventured in the tablet market, the announcement lacked the surprise element since @evleaks had already published most of the details on micro-blogging site Twitter.

Along with the Lumia 2520, Nokia has also announced the Power Keyboard, which smart cover with a keyboard built into it. This accessory brings extra five hours of battery life and two USB ports to the device.

The lumia 2520 comes in red, cyan, white, and black. It will start rolling out in US starting next month. The slate will initially be available for sale in the US, UK, and Finland at an estimated price of $500 before local taxes and subsidies. It will be spreading to other markets shortly.