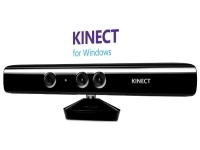 Microsoft CEO Steve Ballmer has disclosed that the Kinect is officially headed to Windows this February. This was revealed in Ballmer's keynote speech at the ongoing 2012 Consumer Electronics Show. Released at the end of 2010, the Xbox 360's motion controller was co-opted by the open source community within no time after Adafruit put a bounty on it. On the gaming front, however, the Kinect hasn't been able to pull itself out of the casual gaming rut. The most one can expect out of the controller are superfluous implementations in mainstream X360 games and generic Wii Sports clones.

While Ballmer hasn't divulged pricing details, Amazon has already listed the Windows version at $250 (Rs 13,250 approx). Although that may be a placeholder price, I sure hope Microsoft isn't planning on selling it at a $100 premium over the console version. That would be daft, considering its target demographic - the DIY enthusiasts - has already found a way to use the console version. Finally, let's not forget the Wavi Xtion, because Prime Sense and ASUS' awkwardly-named love child is also the same thing for all intents and purposes.