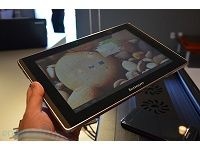 Lenovo seems to be on the right track, going by the promising handsets revealed at Beijing last month. However, it looks like the company has been saving its best for CES 2012. It has launched the IdeaTab K2 at the event, its second tablet yet. The slate features a 10" IPS display with pixel dimensions of 1920x1200 and a quad-core NVIDIA Tegra 3 chipset on board. Other specs include an 8 mp rear camera, fingerprint scanner, and Android 4.0 (Ice Cream Sandwich). It is likely that Lenovo will add a custom UI named Mondrian, just as in the IdeaTab S2. While pricing details and the launch date have not yet been revealed, the cost is expected to be over $700 (Rs 37,000).