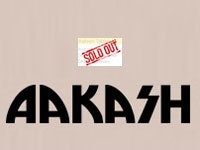 After an overwhelming response, the Aakash tablet has been officially sold out. Its website mentions that booking for the tablet has been closed, while its successor, the upgraded UbiSlate7+, has been sold out till February. You can pre-book the latter only from March.

Manufacturer Datawind is already in the process of establishing new manufacturing units to cope up with the increasing demand. The new units are expected to be functional by April this year. According to the company CEO Sunil Tuli, a supply of 70,000 to 75,000 units per day will be possible after April.

The Aakash costs just Rs 2500, making it the cheapest Android tablet PC in the world, while the UbiSlate 7+, scheduled to launch in mid-January, costs Rs 3000. The low cost is the primary driving factor for the extreme demand for these devices in a price-sensitive market like India.