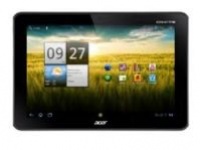 Acer has added the ICONIA Tab A200 to its portfolio of Android tablets. The new entrant will run Honeycomb 3.2 out of the box, and will receive the Android 4.0 update sometime in February.

According to Acer, the gadget is powered by NVIDIA's Tegra 2 chip, which houses a 1 GHz dual-core CPU coupled with a ULP GeForce GPU. Its 10.1" screen has pixel dimensions of 1280x800. Other specs of the device include a 2 MP front camera, Wi-Fi, Bluetooth, USB port, 1 GB of RAM, up to 16 GB of onboard storage, and a microSD card slot. Yes, the manufacturer has axed the main camera to keep the device's cost down.

Although the A200's specs may not sound very impressive, its full-sized USB port can make things interesting. The port will probably support the USB OTG feature, which allows users to connect keyboards, pen drives, and even portable hard drives to the device.