BlackBerry's famed messaging service is all set for an Android and iOS release. 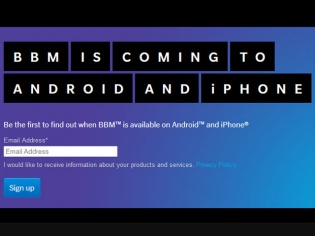 As BBM addicts eagerly wait for their beloved messaging service to grace iOS and Android devices so that they can switch OS and handset loyalties, a video showing off the messenger on Android has been making the round. Originally posted by BlackberryOS.com, the clip shows off the BBM for Android on an HTC First. Still in the beta stage, the app is very similar to the one running on the BB10 OS. Check out the video below for details.

Meanwhile, the landing page announcing the arrival of the app is already up and you can sign up with your email id to be informed as to when the app becomes available on the Android/iOS app repositories. Considering how it was expected to be a "summer" launch, the service in all possibility will be up by the end of September.