Home » News » 'Pacific Rim' Like "Drifting" In The Near Future

It's almost like Pacific Rim "Drifting", but in only one direction for now. 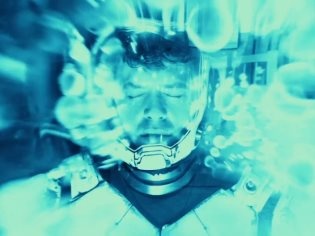 If you thought that Drifting or brain syncing in Pacific Rim was science fiction, you are in for a surprise because a group of researchers at the University of Washington has demonstrated that this is actually possible. The pilot study of direct brain-to-brain communication in humans was conducted by Rajesh Rao, Andrea Stocco, and a few colleagues. The aim of this experiment was to find out if it is possible to control the brain of a human being via electrical wiring. While it is similar to drifting in the Pacific Rim movie, the difference is that the communication in this case is unidirectional as of now. 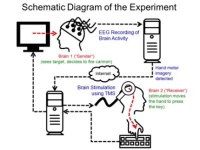 The two researchers sat at two different locations in the college campus with one (Rao) acting as a sender, while the other (Stocco) was the receiver. The "sender" had EEG sensors connected, while the receiver was fitted on the head with a TMS (Transcranial Magnetic Stimulation coil) for brain stimulation. The basic idea was that the sender would visualise lifting his hand, which would get recorded by the EEG and translated into electrical impulses. These were then sent across the Internet to the TMS fitted to the fellow researcher. Rao was watching a simple arcade-style video game on the screen and visualising lifting his hand to press the space bar to fire. The experiment resulted in success as it was Stocco who was pressing the space bar instead to eliminate the threats, even though he was not able to view the game on the screen. The human brain is too complicated and scientists are only now unravelling a few of its secrets and potentials, while most still remain to be discovered. While you keep thinking about the implications of this research, check out the interesting video: