Priced at $300, the Android-based handheld is available on the official website. 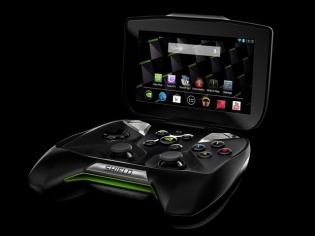 After providing the graphics muscle for desktop and portable computing platforms ranging from smartphones to gaming rigs, NVIDIA's own Android-powered handheld videogame console has finally come to fruition. The device is now on sale for $299 (approx Rs 18,000) after eleventh-hour mechanical issues that delayed the release by a month. It can be bought off the official website, or through Newegg and other partnering brick and mortar outlets such as Gamestop. In other words, if you are hankering for one, it's time to write an email to your favourite US-immigrated uncle.

The handheld device caught gamers' fancy, after its unveiling at CES this year, by incorporating NVIDIA's powerful Tegra 4 mobile SOC, 2 GB of RAM, 16 GB storage, and Miracast-certified Wi-Fi radio. The latter especially promises the capability to stream PC games right to the handheld. Promises, because the functionality is still under testing and requires at least an NVIDIA GTX 600 graphics card. The 5" flip-up display sports a pixel dimensions of 1280x720 and is bolted straight onto a chassis that clearly draws inspiration from the Xbox 360 controller.

However, the greatest USP of the Shield is its Android Jelly Bean underpinnings. This democratises software delivery—an aspect that's sorely lacking in the console space. If played right, this should come as a breath of fresh air in the wake of the big three console makers clamping down on videogame distribution and ownership in an Orwellian fashion. Not only will the Shield be able to run virtually any Android game out there, it also plays well with Android apps.

While there have been previous, rather unsuccessful attempts by Ouya, BlueStacks, and Green Throttle, none of those attempts truly leveraged the real draw of mobile gaming — the ability to take your games on the road. Do you think the NVIDIA Shield will be able to make a significant headway in the dying handheld console space? Let us know in the comments.