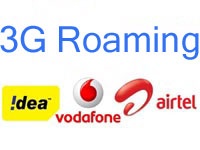 The ban on 3G roaming slapped by the Department of Telecommunications (DOT) has been stayed. The Telecom Disputes Settlement and Appellate Tribunal (TDSAT) decided upon the matter at a special hearing on Saturday, after Bharti airtel, Essar Vodafone, and Idea Cellular challenged the earlier DOT ruling that 3G roaming agreements between the three were illegal. TDSAT has asked DOT to not take any action against the service providers until the next hearing on 3rd January.

The point in contention was that DOT had failed to make it clear at the time of bidding for the 3G spectrum that intra-circle roaming was against the rules. No operator was able to procure 3G licences for the entire country, and hence had to resort to agreements to enable national roaming for their subscribers. The ban would have effectively crippled the 3G service of all the above telcos, since they would have been constrained to providing it only in their respective circles.

All hopes are now pinned on the January hearing, when the dispute tribunal will deliver the final verdict. Who do you think should win: DOT or the 3G operators?