6.5 Ton Satellite To Crash On Earth 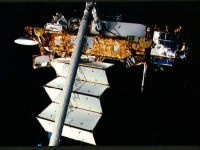 The Upper Atmosphere Research Satellite (UARS) has been wandering off its orbit for quite some time. Now, it's losing the battle to Earth's gravity. This means that the UARS is going to enter our planet's atmosphere, and hit the surface.

The satellite is as big as a school bus, but is expected break into several pieces during the re-entry process. Scientists believe that around 26 pieces will survive the re-entry and make it back home. What's interesting is the fact that even NASA has not been able to predict the crash site(s). This is because a minute timing change of the re-entry can make a difference of thousands of kilometres. Although it may land in any part of the world, penguins need not worry as the Antarctic has been declared safe. Our friends at n2yo have put up a live UARS tracker, which you might like to check out.

Scientists are also clueless about the date of re-entry, but it is expected to happen as early as Friday. NASA officials have added that the fallen pieces of the satellite will still remain the property of the US government and cannot be sold for profit to collectors or on eBay (yeah, right).

Let's hope for the best.