Each game in the series to cost around Rs 190. 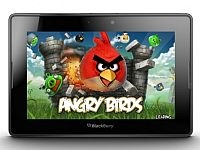 BlackBerry's PlayBook never took off in the market. The limited number of apps was one of the many things that worked against this ill-fated tablet. However, this situation might change a little with the entry of the Angry Birds series to the platform.

As of this writing, three of the most popular games in the franchise have been made available on RIM's tablet. Unlike in the Android Market though, these games are paid and will set you back by Rs 190 each. Although the pricing is high, on the bright side, you won't have to deal with the annoying ads.

Let's hope that other developers will soon follow Rovio's path and bring more interesting apps to the PlayBook. Once BlackBerry's App World starts showing some signs of activity, the tablet may no longer be a bad deal at Rs 19,000.