Mysteriously though, the trending hashtag just disappears from the trends list!

If you are slow to catch up with what is happening in the world, you might want to turn to Twitter. While it is known to be a bit off with what is true sometimes, you'd be a lot more abreast with what is making news in the country. For instance, not many will realise that today is the Congress 'Yuvraj', Rahul Gandhi's birthday. And the Twitterverse is celebrating the day with a lot of scathing tweets, which make for a good read. Here are a few hand-picked nuggets for your reading pleasure. And we promise we save the best for the last:

Some got very technical.

Then some went witty with their caustic sarcasm.

Media asked if Pappu "understands pain" of people. he mistook it as "understand Spain" & went there 2 celebrate hi b'day #PappuDiwas

Happy B'day Rahul Gandhi. He turned 43 today. Suddenly I am also feeling a decade younger. What an youth icon he is! #pappudiwas

(OK, that wasn't too hard, especially when the subject is hell-bent on shooting his own foot!)

The future of Indian children would have been a lot better if Jawaharlal Nehru didn't have any children. #PappuDiwas

And how can we forget the curious kittens?

Happy Birthday Rahul Gandhi. How come no national holiday? Yuvrajyotsava or something like that.

When is your B'day? ;) RT @sardesairajdeep: And twitter's top trend is an inane #pappudiwas. So much for social media.

Hehe. http://t.co/sgjohk8m1d is still under construction. Much like the man himself. (Hat-Tip: @OhYesAbhii)

The website that the tweet directs you to is a masterpiece in itself. The site tries to glorify the "young man's" family, and makes you "talk to the hand", which is ironically Congress' logo. No wonder no reforms happen in the country. Saving grace? Well, at least they didn’t use comic sans for the text! 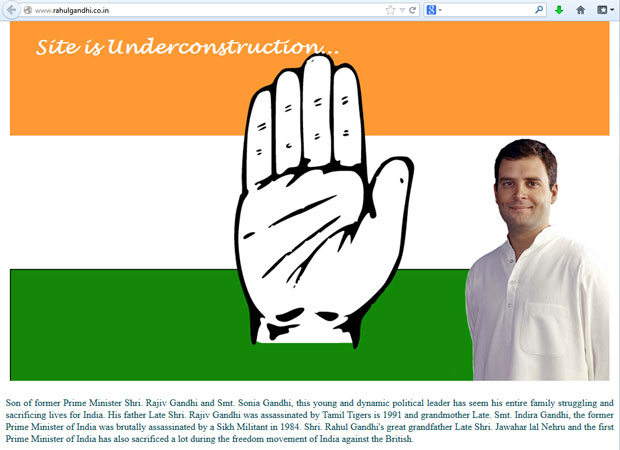