Micromax Canvas 4 Will Be Available For Pre-order From 28th June | TechTree.com

Shows off glimpses of its new flagship smartphone in two teaser videos. 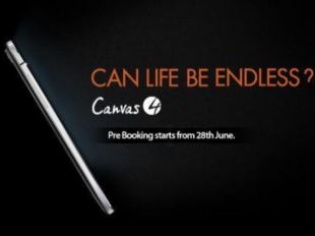 Micromax is poised to bring out yet another smartphone in its Canvas series known as the Canvas 4. The Indian mobile manufacturer has uploaded two teaser videos on its official YouTube account, showing off fleeting glimpses of the upcoming smartphone that could be its new flagship handset. Titled "CAN life be endless?", these video clips show the phone, possibly a rendered version, spinning around in darkly lit environment. From the video, it is clear that the device has a 13 mp rear camera with LED flash, a stylus tucked in the top right corner of the phone, a somewhat convex back with a glistening brushed finish, and a metallic rim. Additionally, it doesn't take an Einstein to know that it is an Android device.

Specifications, and pricing details are not yet out, but it is known that the handset will be available for pre-booking from 28th June. Our guess is that the handset will be priced just under Rs 20,000. The Canvas 4 will probably compete against flagship handsets from Xolo as well as mid-range Samsung models, even though it will vie to compete against the Korean manufacturer's flagship device (the SGS4) by sporting a similar styling. Micromax has been fairly successful in the mobile phone business and is currently at the top of the list among Indian companies. However, the company still faces daunting issues with handset quality and customer support that has been at the receiving end of angry customers who have had bad experiences. You can take a look at the two videos and tell us if you spot anything more: