Home » Mobiles » Nokia Belle Firmware Is Ready For A Rollout

Nokia Belle Firmware Is Ready For A Rollout

Will have it pre-installed on new Symbian devices, OTA update in February. 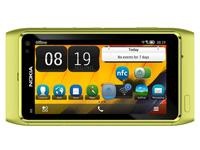 Nokia has added that the Belle UI, launched with Nokia 701, 700, and 603 phones, has received positive feedback from the users. It features more home screens, improved widgets, faster menu navigation, and Android-like notification bar. For in-depth information on this UI, check out our Nokia 701 review.

This is an official image of Nokia N8 running the Belle UI. You can also see an NFC toggle on the screen, which is weird since the N8 doesn't have an NFC chip.