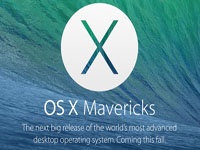 Apple today announced their next-generation desktop operating system, OS X Mavericks, at WWDC 2013. The focus of the new OS is to get better battery life and improve the overall Mac experience. It packs in new features such as Finder Tags and Tabs, Maps and iBooks app, enhanced multi-display support, new Safari, and some energy saving features. In their 10th major release, Apple has moved on from the signature naming convention, which took inspiration from big cats, to a new California theme 'Mavericks'. The new features can be summed up as follows.

Finder Tabs And Tags
As a relief from the clutter of multiple windows floating on the screen, the Finder has been introduced. Finder windows act as browser tabs, allowing multiple windows to be used from a single window and these can be dragged from the Finder to create a standalone window. It also supports drag-and-drop for documents from one tab to the other.

Tags has also been added to as a new feature to catagorise documents, making it easier to search from the Finder window. A single Finder window can be opened to get files tagged in a particular category.

Multiple Displays
Mavericks offers multiple display options with the menu bar and the dock being available on the secondary display. Apps can be run in both windowed and full-screen modes independently on both the displays, without the need of any change in configuration. Mavericks can also connect to HDTVs via AirPlay and Apple TV to use as a secondary display.

Safari, Maps, And iBooks
Significant upgrades have been made to the browser, with improved bookmarking and performance update. A new feature 'App Nap' has been introduced, which does not let the battery drain away while animation, ads, or videos are playing in the background. Maps and iBooks are now making their way to desktops through this new OS.

Additional features of the OS X Mavericks include iCloud Keychain, which securely stores login and credit card information to access over all of user's devices, Calendar in sync with Maps, and an interactive notification center.

OS X Mavericks is up as a developer preview version as of now and will be made available for the general public later this year.