Samsung Borrows A Photograph For Its Facebook Campaign Without Asking | TechTree.com

Samsung Borrows A Photograph For Its Facebook Campaign Without Asking

Tries to pass off professional photographer’s photo as its own; draws his ire. 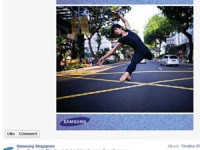 When you climb up the ladder of popularity as swiftly as Samsung, companies need to realise that they are under the public scanner. It is wrong to mislead foolish people who blindly trust whatever their favourite brands say. And Samsung seems to be suffering from several PR gaffes, that too in quick succession.

After hiring students to post fake reviews denouncing HTC's smartphones (and being caught in the act), this time a Cnet Asia report shows how the company's Singapore unit tried to pass of a street photographer's DSLR shot as that of a its own, that too without his consent. The owner of the photograph left a comment on the Facebook post demanding to know why his picture has been used without his knowledge or permission.

Meanwhile, Samsung has responded to Cnet in a press statement, stating that the "photograph in question was mistakenly uploaded" by the agency hired by the company for the online campaign. The image has been pulled out from the site.

The picture which appears on Danny Santos' website has been snapped using a Nikon D700, as per the image's EXIF data. Looks like Samsung is trying a bit too hard to replicate its successful smartphone marketing strategy with its range of digital cameras. We just hope they do it a bit more ethically.