Home » Software » Rumour: Next Windows Phone Update Will Bring Notification Centre And I...

Revelations come from a Reddit user, who probably purchased a developer version of Nokia Lumia 920.

Microsoft its trying its best to sway public affection towards its mobile OS platform. According to a Reddit.com user Chinaman28, his recently-purchased Nokia Lumia 920 packs in a bunch of "weird" apps. This includes a notification centre, ability to close background tasks, improved calendar, and a few UI tweaks. Since the handset has been purchased on eBay, there's a possibility that its some unlucky developer's lost device, which ended up on the online store. As proof, Chinaman has posted several screenshots from the phone on his Flickr feed. You can view all those images here, or simply check out the most interesting ones embedded below. 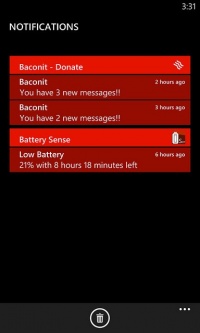 The first screen grab reveals a 'close' (x) button on the card-based multitasking menu. Next up is a notification centre, which seems to be in early stage looking at its lack of polish. Since the Live Tiles already deliver all the notifications to the start screen, I don't really see the need for a dedicated notification centre. The third screenshot shows off a much-needed Week view in Calendar. You'll also notice that there are other useful additions such as ability to sort apps based on frequency of use. Those on expensive connections will appreciate the Data Sense app that lets you keep a track of your data usage.

The images look genuine, and I presume these improvements are part of the upcoming Windows Phone Blue update. However, until we receive a confirmation from a credible source, we'll treat this news as a rumour.