This BB10-based handset has a 3.1" square Super AMOLED touchscreen along with a hardware QWERTY keypad, and will be available from today. 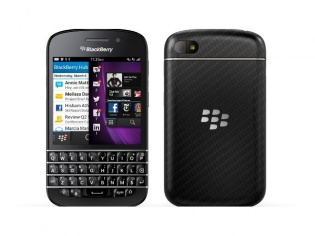 The latest BlackBerry Q10 has been unveiled in India and has been set to release later today. The company is staying traditional with this phone as it has the famed QWERTY keypad along with a 3.1" Super AMOLED touchscreen. Strangely, this screen is square with pixel dimensions of 720x720, which is against the usual wide-screen or even 4:3 aspect ratios prevalent in almost every phone out there. That may have some repercussions with playing videos, so you better be ready for some really thick black borders at the top and the bottom. The BB10 device is powered by a dual-core 1.5 GHz CPU with an ample 2 GB of RAM and a 16-core GPU. The internal storage is 16 GB with option for up to 64 GB via microSD card slot. An 8 MP rear snapper with autofocus and LED flash, and a 2 MP front camera capable of 720p recording take care of imaging. Here are the device's specifications:

Even in this age of touchscreen phones, BlackBerry purists will surely be delighted by this new offering with a physical QWERTY keyboard from the company, which is known to be one of the best available on a handset. The BlackBerry Q10 is probably the company's way of staying true to its legacy. The device is already listed on online stores for Rs 44,990, and should be available later today.