And it costs 4K dollars too; India availability and pricing is not yet known. 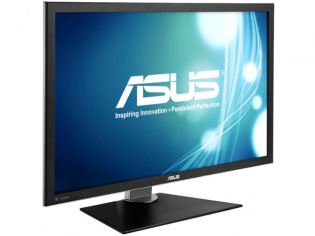 ASUS isn't just introducing gadgets and gizmos at Computex 2013, it's now shown off its 31.5" PC monitor supporting 4K — PQ321. Thus, this is an UHD (Ultra High Definition) monitor with 3840x2160 pixels, which is four times as much as Full HD (1920x1080). The panel uses Indium Gallium Zinc Oxide (IGZO) instead of amorphous silicon as is traditionally used, which allows it to have smaller transistors and pixels. Even with the smaller pixels, the considerably large area of the monitor results in a rather high pixel density of 140 PPI. For comparison's sake, a 21" monitor with 1920x1080 has 105 PPI. Images should therefore appear crisper on the PQ321.

It supports 10-bit RGB for deeper colour reproduction and an 8 ms grey-to-grey response time for smoother visuals. The brightness of 350 cd/sq. m should also help keep things bright and visible. The IGZO technology also allows it to shed some bulk and keep the thickness at 35 mm at the thickest point while the viewing angles are specified to be 176 degrees wide. A DisplayPort is present, and US models will have dual-HDMI ports with Picture-in-Picture support. The built-in 2 W stereo speakers should help you out when you don't have headphones. The ASUS PQ321 is priced steeply and beyond most consumers' means at $4000 (Rs 2,26,000) and will be available in North America. It is not yet known when and if at all it will be available in India.