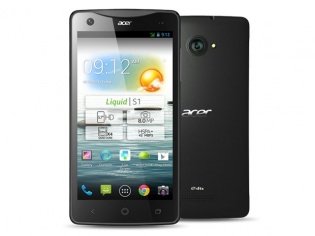 At this year's Computex in Taipei, the Taiwanese hardware-maker Acer has announced an oversized phone called Liquid S1. It sports a 5.7" screen with pixel dimensions of 720x1280. The Android-based device comes with dual-SIM functionality. The Liquid S1 is powered by a 1.5 GHz quad-core processor (probably made by MediaTek). The 1 GB of RAM should be sufficient to handle Android 4.2 Jelly Bean. Apart from that, you get 8 GB of internal storage, microSD card slot, Wi-Fi, Bluetooth, and a 2400 mAh battery. The phone also packs in a rear and front cameras, but the company hasn't officially shed light on the megapixel count.

The specs of the Acer Liquid S1 are:

According to the press release, the phone's user interface includes several tweaks including Acer Float that allows several app windows to stay open so users can multitask without having to back out of one app to work on another. It also includes DTS powered Studio Sound offering a richer audio experience. The Acer Liquid S1 will start shipping in Q3 2013 in Europe and Russia with a starting price of 349 Euros (Approx Rs 26,000). If Acer releases it in India, the handset will compete directly with Samsung's GALAXY Mega 5.8. While we haven't tested these devices, the Liquid S1 looks better on paper due to its HD screen and quad-core processor.