NVIDIA's latest next-in-command from the GeForce GTX 700 series will be priced under Rs 30,000. 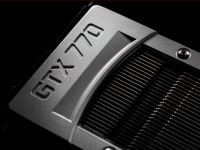 NVIDIA just announced the launch of their latest desktop GPU, the GeForce GTX 770 for Rs 29,990. The model number alone clarifies where this latest beast from NVIDIA's stable sits – squarely between the TITAN's little brother GTX 780 and the soon to be released GTX 760.

Engineered to be faster than the previous generation GTX 680 but obviously slower than current gen GTX 780, as NVIDIA so gleefully markets on their performance page; the GTX 770 should turn out to be a decent little money spinner for NVIDIA. For the number-crunching geeks in you, here's what the most relevant specs look like:

As far as the dimensions of the card go, it should come as no surprise that NVIDIA vehemently follows "Bada hai toh behtar hai" (bigger the better) principle with the card length being nothing shorter than 10.5", and continues with the on going tradition of "too heavy on the diet", Dual-slot design.

Most probably we'll see space saving designs for our crowded cabinets from leading card suppliers. For those who'd like to grab one right away in India will have to check out ASUS, Zotac and Galaxy camps. We will bring you updates from those camps as soon as they release their monsters.