Product page is up without official announcement, price not available yet. 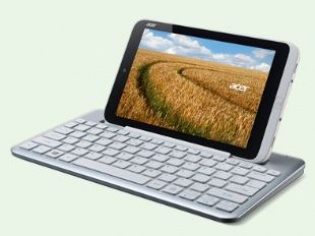 The world's first Windows 8 tablet with an 8" screen — Acer Iconia W3 — has just got its product page, although an official announcement is yet to be made. The Iconia W3's screen has WXGA pixel dimensions of 1280x768 and has a 2 MP camera on top. It is powered by Intel Atom Z2760 CPU with 2 GB of RAM and will come in 16 GB and 32 GB internal storage variants. The product image also shows a docking keyboard, although you will have to buy this accessory separately for better productivity. It boasts of 8 hours of battery backup with 720p video playback. The W3 will come with Windows 8 Pro pre-installed.

Until now, Windows 8 tablets had a minimum screen size of 10.1". It has long been speculated for long that a Windows 8 tablet with smaller screen size is on the cards, but it wasn't known which manufacturer will take up the gauntlet. A smaller screen size will let it compete with the iPad mini and several other Android tablets, provided the price is set right. Now that the screen size restrictions have been eased, we can expect lower priced tablets running Windows RT, which should be cheaper than those running Windows 8.