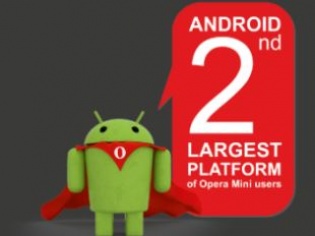 Even though feature phones are in a majority as far as Opera Mini users are concerned, the amount of data usage is significantly higher on smartphones. This is likely the result of smartphones supporting faster wireless data transfer standards such as 3G and Wi-Fi. Android users were found to view 29.5% more monthly pages than the average user.

India being a budget oriented market, the top 10 Android devices used to access the web via Opera Mini are priced less that Rs 10,000, the exception being Samsung GALAXY S2, which comes in at number 10. Speaking of which, Samsung almost completely dominates this list with 9 devices. The top 100 list has Samsung in the leading position with 31% share, followed by Sony at 23%, and Micromax at 15%.

What do most people use Opera Mini for? The report has details on this aspect too as it found that a majority access Facebook, followed by Google search, and then cricket, namely ESPNcricinfo. Users also visited websites related to news and information, price comparison, and e-commerce. Lastly, the report concludes that the average Opera Mini user is male and aged 18-24 years. Check out the slideshow below to find out other interesting findings of the report.