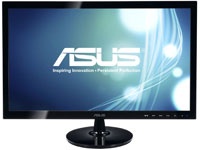 ASUS has announced the launch of a new LED-backlit monitor, the VS247H. Being eco-friendly, you may be led to believe that the name suggests its 24/7 usage, though it is only a coincidence, as the 24 is the diagonal screen size in inches. Sporting Full HD capability, this monitor sports a slim profile with a sturdy stand, which gives it a touch of style. While the base stand allows it to be tilted by 20 degrees to the back and 5 degrees to the front, the monitor can be removed from its base stand and mounted on a VESA-compliant wall mount if so desired.

While the specs claim a contrast ratio of 50,000,000:1, the Smart Contrast Ratio feature claims to enhance the display's contrast by automatically adjusting the luminance of the backlight to deliver better blacks and whites. The monitor also comes with SmartView Technology, which aims to deliver the same colour and image quality regardless of the viewing angle. Being a TN panel, we suggest you take this with a pinch of salt. Additionally, it has Splendid Video Intelligence Technology supposed to optimise video performance and image fidelity by enhancing colour, brightness, contrast, and sharpness. Users can select six preset video modes via a hotkey to suit their viewing choice.

The VS247H comes with HDMI, DVI-D, and D-Sub inputs as well as a 3.5 mm earphone jack for audio-out when using HDMI. The good thing is that it comes with DVI as well as VGA cable, so you don't have to spend extra. The claimed power consumption is stated to be 33 W during normal use, which is actually a bit on the higher side when considering the fact that this is actually an LED-backlit monitor and supposed to eco-friendly.