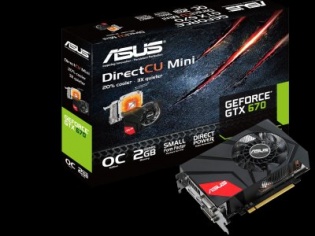 It is nice that ASUS has re-engineered the DirectCU cooler to fit small form factor cases and offer less-noisy operation of high-end graphics cards. On the flip side, the "Mini" Kepler-gen GPU in a short body lands up at least one-third costlier than a standard GeForce GTX 670 variant, which itself is already priced at the upper-end. The ASUS GTX670-DCMOC-2GD5 carries a 3-year warranty and is priced at Rs 34,350 excluding taxes.

Small form factor PCs based on mini ITX motherboards can be contained within compact cases, and thus be easier to transport to LAN parties than a standard desktop PC. At a time when the need for a PC is being questioned, enthusiasts who'd spend large amounts of money on high-end components and pigeon-hole themselves into a non-standard form-factor would probably be few and far between. Moreover, high-end gaming laptops are increasingly taking over this role, even among those who still do attend LAN gaming parties.

Mr. Vinay Shetty, the Country Head for Component Business, ASUS (India) said, "The ASUS GTX670-DCMOC-2GD5 measures just 17cm in length; it also has copper vapor chamber placed directly on top of the GPU for faster heat spreading and dispersal with 20% (or 7.5∘C) lower temperatures than reference GTX 670 making it the perfect choice for compact gaming PCs." The important specs are listed below, full specifications of this graphics card can be found on Asus' website: