And we wonder why! 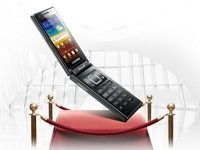 Manufacturers always tend to sideline the clamshell design when it comes to smartphones. This time around though, Samsung has released the W999, which is a clamshell device running Android 2.3 (Gingerbread). Interestingly, the Korean giant has slapped two 3.5" screens on this mobile, claiming that users can either use it as a full touch screen phone, or flip it open to access the physical keypad.

This dual-screen phone is powered by a 1.2 GHz dual-core CPU. It has a primary 5 MP rear camera and a front 1.3 MP camera for video calling. Other bells and whistles include Wi-Fi, Bluetooth, GPS, 16 GB internal memory, microSD card slot, and a 1500 mAh battery. The device is 0.7" thick and weighs 206 g.

The W999 is expected to hit the Chinese markets in January, 2012 at a price of around 10,000 yuan (approx Rs 80,000)! Although these kind of phones do look impressive on paper, we wonder if having two displays is really a practically feasible idea.

Here's the W999's promo video for you viewing pleasure.