Comes with a "Charm" to entice women. 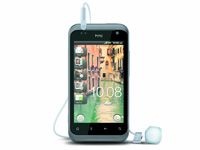 HTC has launched yet another smartphone based on the Android platform. The latest addition to its portfolio in India is the Rhyme, which relies more on its design than performance. The device also stands out due to a special accessory called the Charm. This small LED-lit cube can notify you of incoming calls or text messages when plugged into the 3.5 mm jack. HTC claims that this feature will be useful when the phone is kept inside a purse. It looks like the Taiwanese manufacturer wants to target female buyers with this add-on.