Peek At Mount Everest And The Kilimanjaro With Google Maps 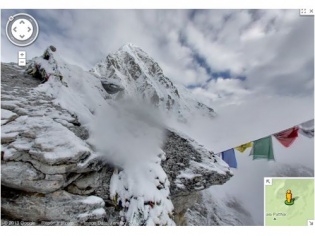 If Bing Maps is busy mapping the depth of the world's oceans, Google seems to taking time off to scale some of the world's highest mountains. The newest destinations include four famed mountain peaks: Aconcagua (South America), Kilimanjaro (Africa), Mount Elbrus (Europe) and Everest Base Camp (Asia).

At the forefront of the initiative is a Dan Fredinburg, one of the "Google Adventurers" who photographed the four peaks. The official blog post further mentions snaps were taken with a "simple lightweight tripod and digital camera with a fisheye lens".

The new additions will be also available for Google Maps app on iPhone and Android devices. For more pictures, head over to this link. You can find a more detailed description of the team's chronicles here, or relive the Hangout session which was conducted a couple of days ago.

That being said, Google is not the first to offer panoramic shots from the Everest. A non-commercial project that puts 3D aerial panoramas up on the net that is known as AirPano has done it before.