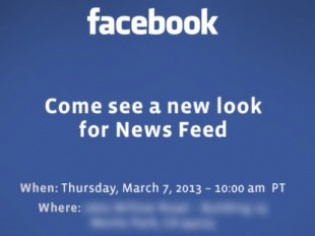 Social networking giant Facebook seems set to showcase a new look for its news feeds on March 7. It has been 15 months since the last major redesign, when the Timeline began rolling out.

The Next Web says that Facebook will unveil the new look in an event that will be held at the company's Menlo Park headquarters (SF Bay, California) and says that the company is also testing single column timeline (which is expected to make timeline navigation easy) for certain users in New Zealand. Facebook usually targets a select bunch of users for testing new features and revisions that are planned, before introduce them to the world.

Facebook has sent out media invites with the tagline (sic) "come see a new look for News Feed".

The company had made changes to its News Feeds in the later part of 2011, and has been playing around with it ever since. In December last, Facebook gave its iOS app faster News feeds along with the timeline feature. This new "refurbished" iOS app is available for download from Apple's iTunes Store. Facebook's mobile feed is rumoured to abandon the blue and white chrome design, and feature full-screen photo tiles.