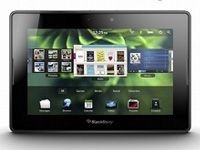 The BlackBerry PlayBook may not have been a success, but this hasn't stopped RIM from releasing a software update for existing users. The latest v1.0.8.4985 update delivers Adobe Flash Player 11.1 and Adobe Air 3.1 to RIM's tablet. Apart from that, it reportedly improves Wi-Fi and Bluetooth performance. The upgrade also fixes certain issues in BlackBerry App World's account payment that some users faced. Moreover, automatic daylight savings are now enabled for time zones in the regions of Latin America, Australia, and Central America.

To keep your playbook up-to-date, use the Software Update feature found in its Settings menu. If you're a tablet fan waiting for a good deal, this seems to be the right time to grab a PlayBook, since it's currently going for Rs 18,700 on Letsbuy.com