Continues to mix business with pleasure. 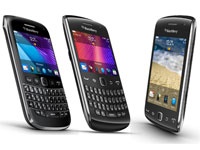 Research In Motion (RIM), continues to remain on a roll as it introduced three new business smartphones based on the new BlackBerry 7 OS in India. While the BlackBerry Bold 9790 combines the QWERTY keyboard with a high-res touch display, the Curve 9350 is its first CDMA device, and the Curve 9380 is the company's first ever Curve phone with an all-touch display. RIM continues with its strategy of making stylish and slim phones, while maintaining the business features, in a move to attract a wider customer base.

The BlackBerry Bold 9790, which is the most expensive, powerful, and feature-rich of the trio, is built with premium materials and sports a narrow design to make it easy to carry. It comes with a 2.45" high-res display and the QWERTY keyboard made popular by the company, along with an optical track pad. It is powered by a 1 GHz processor, aimed to provide fast and smooth performance with a responsive touch-based navigation. Web browsing, multimedia, and document management features are present in the device. It has 8 GB onboard memory, which can be expanded to 32 GB using microSD.

The BlackBerry Curve 9350 comes with a QWERTY keyboard with an optical track pad to facilitate easy one-handed navigation. It also comes with Wi-Fi, GPS, and a 5 MP camera with flash and video recording. A microSD slot supporting up to 32 GB memory is also present.

The BlackBerry Curve 9380 is the first all-touch smartphone in the Curve family. Sporting a stylish design, it comes with a 3.2" display with an intuitive virtual keyboard and optical track pad. It is provided with pre-installed social networking apps such as BBM, Facebook, Twitter, and Social Feeds. It has a 5 MP camera with flash and video recording to capture and share your special moments.