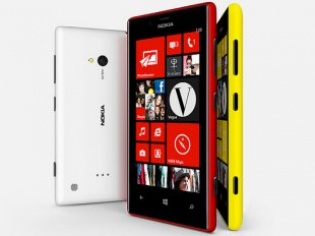 Nokia has unveiled its spanking new Windows Phone 8 smartphone - Lumia 720 at the MWC in Barcelona, Spain, according to a press release. This smartphone is being portrayed as a trendy and social device that lets you remain online and keep your friends updated with your latest snaps.

While it does not feature PureView technology, it still sports a 6.7 MP Carl Zeiss F/1.9 lens, thus should be a decent snapper. Also, it features a new pre-loaded digital lens known as Glam Me that will let the user edit and fix their photos (whiten teeth, widen eyes, and oversaturate colours, among other things). Additionally, there is also a 1.3 MP wide-angle front camera that can click self-portraits, group shots, and also be used for video chat.

The smartphone sports a polycarbonate unibody design, which is normally a feature reserved for devices in the high-end range such as the 920. However, it is said to be slimmer and lighter than the 920, even though it contains the wireless charging coil that is known to considerably add to the bulk.

The Nokia Lumia 720 is set to initially launch in China and a few European countries, but we can expect it to trickle down to India sooner than later as the company has already put up a product page for the country. The current pricing is estimated at Euros 250 (Rs 18,000) before taxation and subsidies. The Lumia 720 appears to be set to be placed somewhat below the 820 as far as the specs are concerned, so a price tag of under Rs 20,000 for India seems to be a reasonable guesstimate.