Rumour: Supposed Images of Nokia Lumia 520 and 720 Surface on Twitter 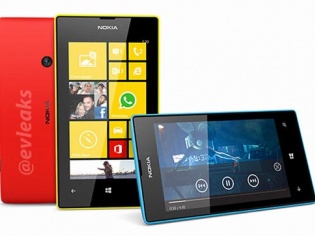 Last year just before the launch of Lumia 820 & 920, images from the press shots were leaked by @evleaks on Twitter and they were accurate to say the least. This time it is no different. We are just a couple of days away from the Mobile World Congress 2013 and new images of mid range Lumia smartphones have been leaked again by the same Twitter handle.

Below you can see the image of Nokia Lumia 520 (codenamed "Zeal") which WPCentral claims to sport a 4-inch touchscreen with a 5 MP rear camera, 512 MB RAM, 8GB of internal storage and a dual-core 1 GHz processor.

And here is the image of Lumia 720 (codenamed "Fame") which is claimed of having a 4.3-inch Clear Black display, with 8 GB of internal memory, 512 MB RAM, dual-core 1 GHz processor, 2 MP front camera and a 6 MP rear snapper. It also comes with support for HSPA+ and a microSD card expansion slot. Both the devices are seen to come in an array of different colours.

These mid range Windows Phone 8 devices are expected to take the center stage at Nokia's media briefing with possibly some other devices (if any) at MWC 2013.