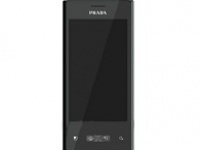 Remember the Prada-branded LG phone (LG KE850) that broke cover in 2007? The handset was in fact the first to feature a capacitive touchscreen display and is currently up at New York's Museum Of Modern Art. The handset was widely popular worldwide and managed to sell about 1 million units. LG and Prada continued the collaboration and came up with a successor in the form of the LG KF900, which featured a slide-out QWERTY keypad. Sadly for LG, the handset didn't quite make a mark in the market.

Now it seems like the two companies will launch a third installment in the series. Dubbed as the PRADA phone By LG 3.0, the new device seems to be in sync with modern technology. The handset apparently will feature a fresh new interface and design that both partners have been working on.

CEO of LG Mobile, Jong-Seok Park said in a statement, "Having successfully launched two PRADA phones by LG, we look forward to collaborating further to develop premium handsets representing the most sophisticated style". This pretty much confirms the existence of the new LG Prada handset, and it is expected that LG will make an announcement soon.

There isn't much info available about the device itself besides a concept design and the fact that it will feature a touchscreen display. We can guess that Android will be running inside this new handset. One rumour suggests that it could feature a 4.3" NOVA display with a very thin form factor (8.9 mm), along with a dual-core chipset and Android 2.3 (Gingerbread) onboard. According to this rumour, the handset will be called the LG Prada K2.

We can expect the device to go hard on your wallets since this is a Prada-branded device, so don't be surprised if this far exceeds your budget. The LG Prada 3.0 seems like a limited-edition handset, further justifying its steep price.