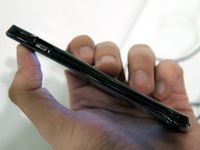 A few months ago, Apple and Samsung were trying to outdo each other in declaring their flagship phones as the world's slimmest. The UK's Advertising Standards Authority (ASA) cleared the air by ruling in the iPhone's favour. However, Apple's device was soon overthrown by the Motorola RAZR's 7.1 mm super-slim body. I knew that even RAZR wasn't going to be on top for long, but was anyone expecting Fujitsu to deliver the world's thinnest smartphone?

Regardless of our expectations, here it is -  Fujitsu's Arrows F-07D. It's 6.7 mm thick, and the smart Japs have made sure not to include any protrusions like those on the GALAXY S II. Despite being insanely thin, the F-07D packs in impressive specs. This Android device is powered by a 1.4 GHz CPU and has 512 MB of RAM.{C} Apart from that, you get a 4" display encased in Gorilla Glass, a 5 MP camera, 1 GB internal storage, a micro-USB port, and a micro-HDMI port.

The Arrows F-07D will hit Japanese stores in 2012 on the NTT DoCoMo network. However, there's no word on its worldwide release yet.