Portrays them as a bunch of style-conscious victims in the Galaxy S II ad. 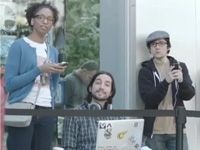 The war between Samsung and Apple has grown beyond patents. In its latest ad, Samsung has targeted Apple's users in a rather convincing manner. Sadly, this will only boost the morale of Samsung fanboys, who aren't that bright either.

The American ad for the GALAXY S II (GS2) starts with folks standing patiently in a queue to buy the latest iPhone. Needless to say, they discuss their iPhones tirelessly. Additionally, a few fans can also be spotted talking about the device's sketchy battery and unchanged looks in an apologetic tone. It all changes though, when they get a glimpse of the GS2 in the hands of a passerby.

Here's the GS2 ad for your viewing pleasure. Note: Before starting a flame war, keep in mind that no matter how much you love a specific brand, it's never going to love you back.